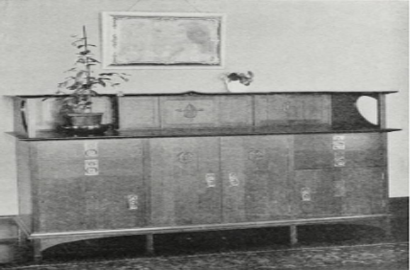 Posted at 10:01h in RARE ANTIQUES by mpiric 0 Comments
0 Likes

Scottish cabinetry makers In 1829 Wylie & Lochhead was started by cabinetmakers Robert Wylie and William Lochhead mainly as coffin builders but they quickly became very successful with many workshops and furniture showrooms in Glasgow, Scotland. Wylie & Lochhead became renowned for their artistic designs and high levels of craftsmanship especially in the late Victorian and Edwardian periods. Wylie & Lochhead most well-known designers were E.A Taylor, John Ednie and George Logan. Their Arts & Crafts Furniture designs were considered of such high quality they were displayed at the Turin International Exhibition alongside those of Rennie Mackintosh and the Glasgow Four.

This sideboard is similar in form to a sideboard designed by Taylor for William Douglas Weir (later Lord Weir) in Glasgow around 1901, following the success of his room for Wylie & Lochhead at the Glasgow International Exhibition the same year.

Delighted to have on offer a circa 1900 Glasgow Arts and Crafts Sideboard by noted Designer E A Taylor , Last time a similar piece went to auction it sold for over £8000.